If you are a grumpy dad like me there are many ways you can relate to Frank Barone, the bittersweet dad from the CBS sitcom “Everybody Loves Raymond”. I watched this show until its very end and my wife and I love watching the reruns. No character made me laugh more than Frank, with his wit and sarcasm interrupting the most random scenes. CBS did a great job in casting the late Peter Boyle as Frank Barone. I don’t think anyone could have done a better job, and Boyle’s Frank Barone is the best T.V. dad in my book.

While Frank had a rough (and boisterous) surface, deep down he loved his family dearly. He showed us that nobody is perfect and it’s never too late to say “I’m sorry” to those you hurt. From Frank we learn that putting your family and God first is true fatherhood. Below are some of my favorite Frank Barone moments.

Hate is a strong word, but I can’t help but relate to Frank here. Maybe it’s the introvert in me, but there a select few people I enjoy being around. The rest…well, I “tolerate”.

I think I speak for most men that feeling “hangry” is the pits, not just for us, but for our family members who must deal with us. Frank Barone was the spokesman for hangry and his family knew how to feed his appetite and keep the peace. Speaking of hangry, I better go grab a snack.

Frank was not known for being the touchy-feely type.  In fact, he frowned upon it. But thanks to his ever supportive (may I say, pushy) wife he was known to give a hug once in a while.

Any others dads out there who wear their emotions on their face? I am definitely guilty of this. My wife often has to remind me to hide my looks of annoyance, frustration, or anger. It’s just that I’m a very passionate person, OK?

Did I mention Frank liked to eat? Show that hoagie who’s boss, Frank!

Frank was never one to follow rules or take orders from others very well. He was his own man and as stubborn as they come. This made family game night a little difficult to endure. Whaddya mean I have to go back two spaces?! What the heck kinda commie game is this?!

No one was a better driver than Frank Barone. If he did end up in a fender bender you better believe it was the other guy’s fault! Sound familiar, fellas?

There was only one thing he loved more than food: quiet time. Poor Marie. *Disclaimer* I would never do this to my wife (or would I?)

As with many men, Frank wasn’t always the best at communication. In fact, he ate his foot more than actual food.

And finally, Frank was always a good sport.

Frank Barone, grumpy dads everywhere raise a beer (and a hoagie) to you! 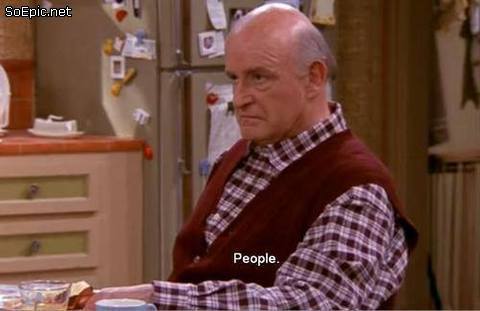 For those wishing to know our Heavenly father and His Son, especially young ladies.

A blog about my spiritual journey in the Lord Jesus Christ.

Life and Adventures with Kids

A Grumpy Man's Journey Through Fatherhood